Pilipczuk Gallery is pleased to announce a solo exhibition by the Polish/American artist Julia Medyńska (1981). Pleas join us for the vernissage on the 21st of January 17:00-19:00.

Medyńska explores the psychology of the individual. Her inspiration and technique originate from old Renaissance and Baroque master painters. When painting, Medyńska doesn’t have a specific painter from the past in mind, but moves with liberty and confidence between the Old Masters, using her individual and contemporary take on the classical styles and techniques.

For Medyńska’s first solo exhibition in Scandinavia, she is revealing thirteen new oil paintings, created especially to fit within the gallery space of Pilipczuk Gallery. The solo exhibition, named Queen’s Paradise, is a humorist yet critical comment on the abuse of power and on the result of placing unfit rulers on the throne. Well, or so it may appear at first glance. On one hand, Medyńska portrays well known archetypes of mythical tales, people of social rank, power, and opulence. On the other hand, the paintings hide dark secrets that are yet to be revealed.

Medyńska has created a narrative in her exhibition, a fairy tale that is to be explored. She invites the audience to take a closer look at the dystopian paradise that the ruling queen La Reina has created. Due to the queen’s misguided reign, it has become a wasteland. In her portrait, the queen proudly possesses her own beauty to hide her tragic truth, while in the back of her, we see a fallen kingdom. In La Reina’s empire reside various characters, which are portrayed in the other paintings of the exhibition. The Fool, inspired by the classical Dutch maid paintings, is La Reina’s advisor and most likely the smartest person, and she is portrayed in Medyńska’s narrative as a woman. Medyńska also introduces the viewer to other quirky characters of the court, like the queen’s daughter La Principessa, The Goddess, and The Seduction:

“They are my actors: Something hidden about them is to be revealed. The Queen, La Reina, holds an exotic bird, a prized possession and a symbol of wealth and power. It is the only colorful element in the painting. The rest speaks to the loss of power. Her daughter is shown smiling, seemingly a normal and happy princess—but we see a dead bird hanging from her hand.” – Julia Medyńska

All paintings in the exhibition are meant to be read together, to combine into a narrative. Yet, that narrative is open for anyone to complete as they see fit. It can be read in any order, and it is open to multiple interpretations, with many different endings.

Queen’s Paradise is split into two parts. The upstairs of the gallery shows paintings in cool tones like blues, greys, and greens, as it represents a dystopian outdoor life. Then, traveling downstairs to the hidden room of the gallery, Medyńska works with warmer tones like reds and golds, painting still lifes and portraits. This creates an experience where the audience travels from the outdoors of the kingdom to the indoors.

In art history, a still life can celebrate a subject’s wealth, but it also reminds us of the end of our existence here on earth. In Queen’s Paradise, the still lifes serve as a subtext to the portraits. They are allegories. Medyńska’s work The Harvest, with the motif of a gold chalice filled with luscious grapes, looks like an ode to victory. Yet the chalice is also filled with a frog— a biblical symbol of imminent destruction and decay:

“I have always been interested in the duality, where the idea of beautiful display and ugly truth coexist.

I hope to give two sides to the story. Just look at the title of the show.” – Julia Medyńska 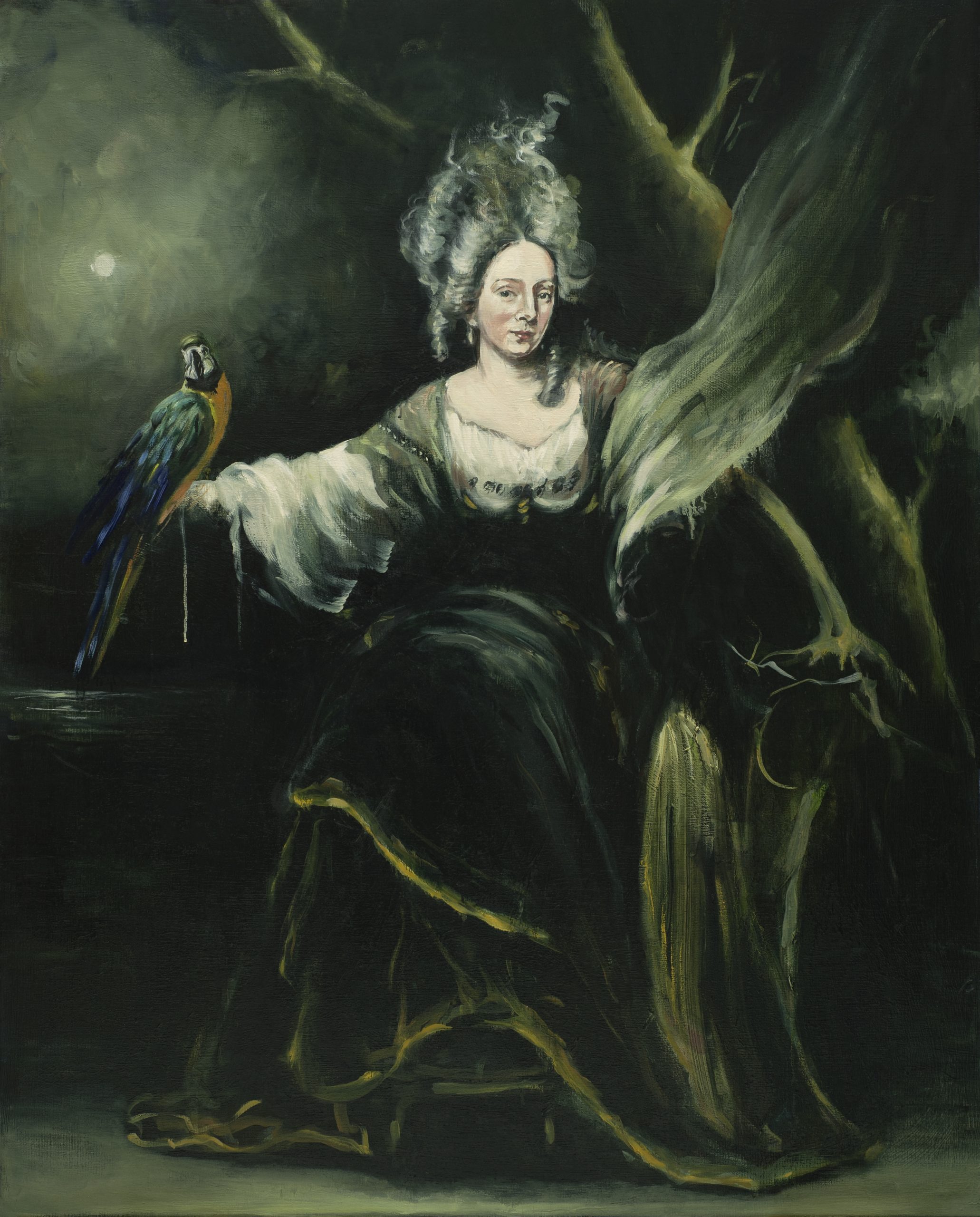 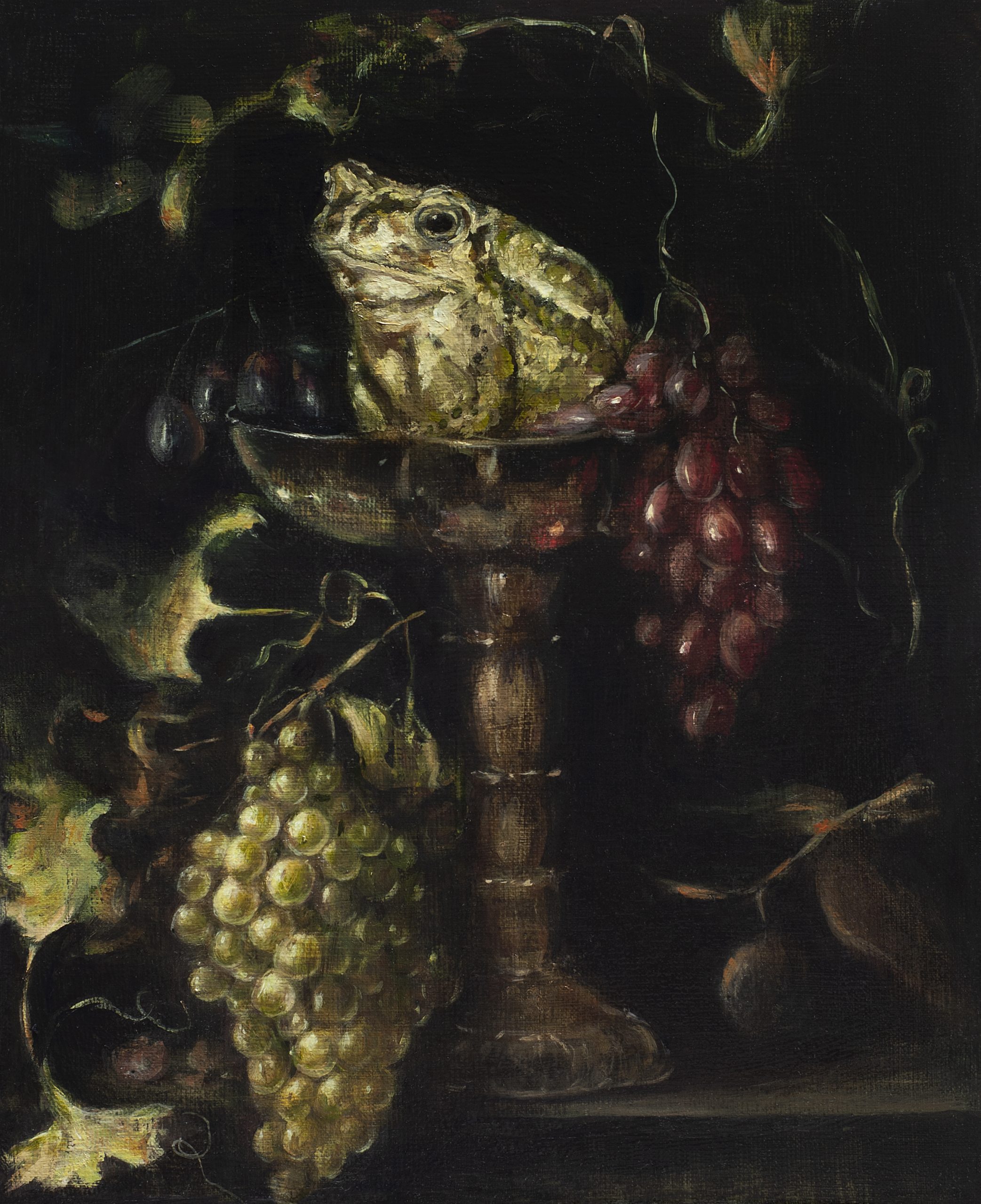